How to Add SteamVR Games to Oculus Home 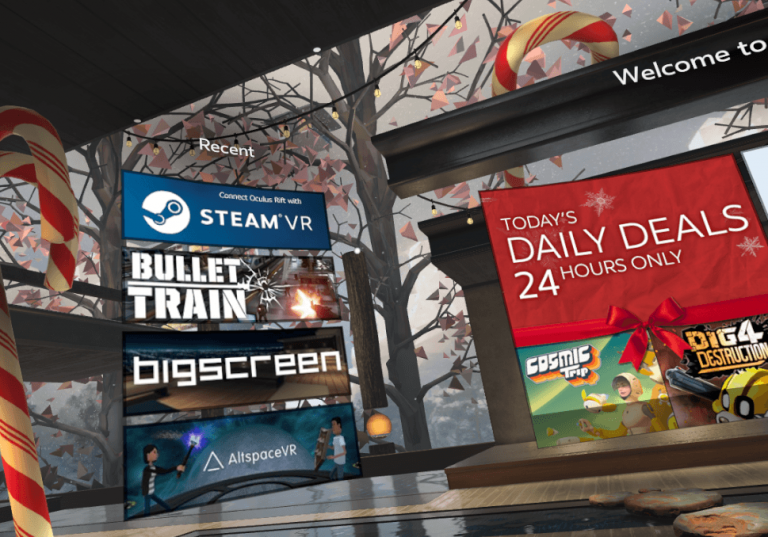 Rifters across the globe, we’re getting there! Slowly, but steadily!

Oculus Rift developers have recently announced that Third Party Apps, namely SteamVR games, would be accessible in Oculus Home with the 1.17 software update. The update was rolled out on August 3.

At first glance, this is a massive improvement over Valve’s own SteamVR Home. SteamVR Home also technically enables you to have an all-in-one solution for your games, but you have to manually search for the right executable (.exe) files to be added to SteamVR library.

However, users still report various problems with the Oculus Home’s newest feature. Most prominent issue is that SteamVR games still don’t show up in Oculus Home.

So, how DO you add SteamVR games to Oculus Home exactly?

First of all, it’s necessary that you allow third party apps:

Now hold on, you’re one quarter of the way through, more or less. In order for your favourite SteamVR games to appear on Oculus Home screen, you’ll need to first launch each and every one separately.

You’ll only need to do it once for each game. Here’s how:

Nevertheless, you might still experience certain roadblocks along the way. It mostly depends on the game title. Project CARS has been reported unable to launch from Oculus Home by dozens of users. Dirty Rally is also supposedly on that list. A bunch of smaller games run into all kinds of problems. I’m sure Oculus is aware of these issues and working actively on patching and fixing them.

At the moment, playing any game that’s not available on Oculus Store, including Steam VR games as well, will make you appear as ‘Online’ to your Rift friends. Unfortunately, there’s no way around it, but hopefully it gets addressed soon enough.

Now, some of you out there prefer SteamVR Home to Oculus Home. For whatever reason.

That’s perfectly fine – if you have no problem manually adding each and every non-Steam game into your Library, then who am I to stop you or judge you?

So, you could simply resort to quick-launching SteamVR from your taskbar, sure. But, what you really need is a shortcut to SteamVR on your Oculus Home. This will let you seamlessly switch back and forth between SteamVR Home and Oculus Home.

At the moment, the most straightforward way to do it is with the nifty little program called Oculus Tray Tool. If you haven’t yet installed it, do it now. Trust me, you won’t regret it. It has a boatload of features, but for this purpose, one is of particular interest to you.

Oculus Tray Tool lets you swap one of your current apps with the SteamVR app. Just choose any small and free app from the Oculus Store, something that you know you won’t use.

Here’s a great video on how to set it up:

Have a trick up your sleeve? Maybe you know a better way how to add SteamVR games to Oculus Home?

Let us know in the comment section down below!

Neurable BCI HTC Vive – The Force Is Strong With This One!

“Use the Force Luke!”

Just as Obi-Wan Kenobi’s words echoed through the galaxy far, far away, so does the invisible “force” of mind move virtual objects across the screen.

It’s 2017, and in the sea of start-ups, one stands out. It’s called Neurable and it was founded in 2015 in Cambridge, Massachusetts. Tech enthusiasts and computer professionals had a chance to try this sensational VR/AR BCI (Brain Computer Interface), eye-tracking and machine learning innovation for the first time at this year’s SIGGRAPH.

Neurable is basically a heavily modified HTC Vive. It’s got EEG (Electroencephalography) sensors placed inside the interior of the headstrap. These small, non-invasive, comb-like structures, when in contact with your scalp, measure your brain’s electric activity and search for patterns. In combination with a proprietary eye-tracking technology borrowed from German company SMI, Neurable offers unparalleled VR/AR experience.

Now, the technology has been around for decades. Scientist have been researching and developing BCIs since 1970s, mainly for use in medical space (ALS, brain stroke, spinal cord injuries…).

Neurable is a significant step forward in applying this technology for non-clinical purposes. Its real secret is the advanced machine learning algorithms that achieve levels of performance unseen so far.

The possibilities for this attractive new development are vast.

Enter Awakening, a game developed by eStudiofuture specifically for Neurable. You play as a child imprisoned in a government lab that does all kinds of experiments on you. These experiments have given you telekinetic powers. The goal is to use these powers to break out of the cell and escape the laboratory.

In the demonstration above you can see the reporter successfully picking 1 out of the 5 objects on the screen, over and over again, without any handheld controller.

Neurable’s machine learning algorithms pick up patterns in your brain activity as reference points upon which individual calibration takes place. By just thinking “grab” when focusing on an object, Neurable can quickly and correctly bring the object you have in mind to the front of the screen.

Later on, you can use the same mechanic to grab the objects around you and toss them at robot guards trying to prevent your escape from the laboratory.

According to Ramses Alcaide, the President and CEO of Neurable, there are two modes. Pure EEG mode simply determines which object you want and delivers it to you. Hybrid mode adds eye-tracking, which has a function similar to a PC mouse, allowing you to use eyes to navigate the screen.

The best solution is a brain-computer interface that allows users to scroll menus, select items, launch applications, manipulate objects, and even input text using only their brain activity. Imagine the productivity revolution that a high-performance, non-invasive, intuitive BCI would unleash in mixed reality.”

For developers, Neurable offers Unity-compatible SDK that comes with the headset and accompanying documentation and guides to quick-start your ideas into the development pipeline.

Neurable raised $2 million in a seed funding back in December 2016. They currently employ 13 people.

The potential is definitely huge, but the competition won’t take time to wait. Neurable is pioneering the field of VR BCIs with machine learning for quick response, but top dogs with big budgets can easily come up with their own innovations.

There are already BCI startups, such as Muse and Thync, that measure your brainwaves and help with focus, calmness and meditation. The tech is easily available to be re-branded in whatever way one sees fit.

One thing’s for sure – as an end user, this is an awesome time to be alive!

Last, but not least, remember: