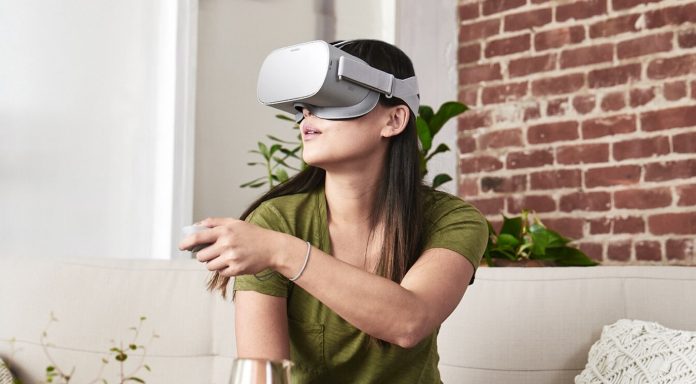 However, there are a great many cheap virtual reality headsets around that can allow one a reasonable experience of virtual reality at a price that is very much less than those of the premium models. Here then are the cheapest VR headsets for PC.

The NOON VR Plus is one of the best VR headsets around in the low to medium price range. If you already own a smartphone, this headset allows you access to virtual reality at an essentially nominal cost.

This headset streams virtual reality applications that are running on your PC to the smartphone placed in the headset. Best of all, the headset uses the gyro sensors in your smartphone to provide for reasonable tracking in virtual reality, which massively increases the immersiveness of this system.

Not only does the NOON VR Plus allow for a wonderful experience of VR, but you can also watch 360-degree videos. The videos are streamed to your smartphone from your personal computer, and image resolutions are both reasonably clear, and with minimal latency and lag. The headset can also access videos stored on the smartphone. The content available is virtually limitless.

One of the interesting aspects of this low-cost headset is the fact that it can stream a movie from a single computer to a number of NOON VR headsets at the same time. This allows a family to share the experience of watching a 3D movie together.

Just how clear are the movies viewable on this headset?

The resolutions are truly astounding, and you’ll understand just why I say so when I tell you that this headset can display videos in resolutions like 11K. Best of all, the energy needs of the headset are very low, which allows you to engage in prolonged VR sessions.

The controls are very intuitive, and basically use the focus of the eyes themselves

A simple tap lets you use the menus, while your eyes are used for the actual browsing. The lenses themselves are both scratch resistant and specially designed to ensure that your eyes do not become fatigued in virtual reality. The headset is light in weight, and so quite comfortable. It weighs just about 240g.

Get the best NOON VR Plus deals on Amazon

There are cheap virtual reality headsets, and then there’s the Oculus Go. It’s a great product, yet for those who follow developments in virtual reality closely, it seems rather like a retreat from the front lines. But it isn’t exactly so, as you will see.

Indeed, the Oculus Go is a determined effort to do no less than bring down the exorbitant price of VR, to bring it within range of everyone.

Best of all, the Oculus Go can be used to play PC games, with the help of an app called ALVR, which you can download here. You can play any SteamVR game or application, but remember that you’ll need a PC that can handle the game in question.

It’s a much simpler device than the Rift, and is similar to headsets that require a smartphone to function – except that the Oculus Go has built-in screens and a processor, and doesn’t need a smartphone! Remember that while smartphone headsets seem cheaper than the Vive or the Rift, they aren’t actually cheaper if you don’t already own a smartphone.

The low cost of the Oculus Go, coupled with the fact that it is completely self-sufficient, make it a headset that breaks new horizons in virtual reality.

The quality of the display is excellent for the exceptionally low cost, giving a resolution of 2560 x 1440 pixels, and the audio quality is also very good. The audio system can actually deliver a believable 3D soundscape, and you can sense the ‘direction’ a sound is coming from in virtual reality.

The headset is also very much more optimized than many other headsets on the market – remember, this is Oculus making the headset, with their vast experience in virtual reality. You’ll find that the ‘screen door’ that so troubles most people’s experiences of virtual reality is very much less pronounced on the Oculus Go.

In short, the Oculus Go delivers very much more in terms of quality than the cost of the device, and you’ll find this is so in terms of both visual and audio quality, and in terms of how exceptionally comfortable the headset is to wear.

Best of all, the Go can be paired with any Bluetooth controller to maximize your gaming experience.

The GenBasic Quad HD can effortlessly run applications off your PC, using an HDMI connection.

The headset has a USB port, an HDMI port, as well as a microSD point. The HDMI is especially important, because it allows the headset to access various other virtual reality platforms.

This highly versatile headset is also perfectly compatible, not only with a personal computer, but also with the PlayStation 4 and Xbox 1. It also supports older systems, such as the PlayStation 3, and the Xbox 360. The GenBasic Quad HD is very intuitive to use, and a simple switch allows you to toggle between mono and stereoscopic content.

The option to break free of cables and connections

Since the headset doesn’t truly require a PC, you can also use it while travelling, or on the way to work. The optics have been designed for clarity, and the resolutions are amazing, with the Quad HD putting out a resolution of at least 2560 x 1440 pixels. That far outclasses most smartphone headsets, and you’ll find that the increased pixel resolution adds considerably to the immersiveness of the experience.

An interesting experience in virtual reality

Visuals are crystal clear, and the integrated audio system provides rich positional audio and a believable virtual reality soundscape. Yes, this headset does not require you to have an additional set of headphones, though it does support both Bluetooth and wired headphones. Since it comes preloaded with an Android operating system, you can access the Google Play Store right away. Besides Android Games and virtual reality videos, this headset also allows you to access Google Cardboard content, as well as Google Expeditions.

The headset itself looks quite sleek, and exudes an impression of quality

The physical design of this device is excellent, and the straps are very comfortable, and can be adjusted to suit the shape of your head.

Check out the best GenBasic Quad HD on Amazon

Those are the most interesting lower end headsets on the market today, and while the experience of virtual reality that you achieve with them will not equal the HTC Vive or the Oculus Rift, they are a very reasonable introduction to virtual reality, at a cost that is a fraction of that of the high-end headsets.

Remember that virtual reality, despite all the technological advances, is still just getting off the ground, and we look forward to very exciting futures in this industry.