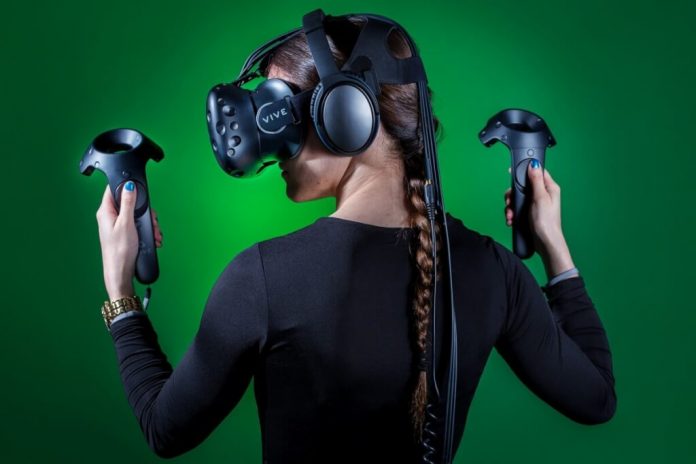 Once you don an HTC Vive, it becomes perfectly obvious why this is considered the premium VR experience today.

Everything about this headset says ‘quality’

The material and workmanship are excellent, and the headset itself is built to last. And that’s just the beginning.

The visual quality is quite simply the best on the market. Resolutions are excellent, and while the HTC Vive Pro takes that one step further, the visual clarity of the classic Vive is perfectly satisfactory. You can hardly notice the infamous ‘grid effect’, even when you’re actually looking for it. The quality of the tracking is utterly precise, while the high refresh rate of the screens allows you to turn your head to look around without any tell-tale after image to spoil immersion. 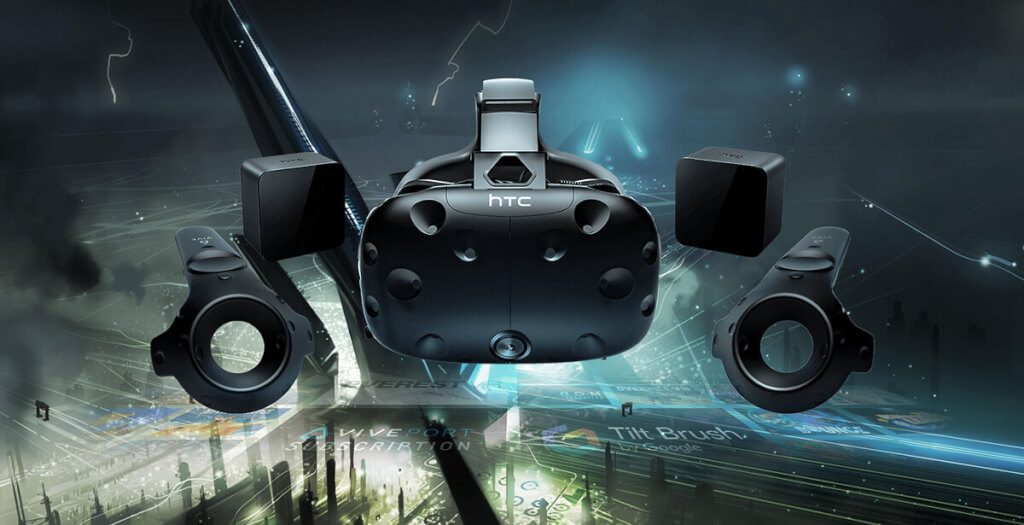 The three adjustable straps provide support and distribute the weight really well. The tie behind the head is well designed, and the front of the headset does not weigh on the nose. How comfortable the headset is depends – to some extent – on the exact shape of one’s face, but most users find it comfortable, and quickly progress to hardly feeling it at all in VR sessions. The design also makes it possible to turn suddenly without the headset’s weight interfering with your immersion in VR.

The headset is very well supported even when you’re looking at the ground, which is a notorious weakness in other models. Even in that situation, as the headset tightens on the face, it feels good, a bit like a ski mask, actually; without giving the impression of having significant weight. Those who use glasses can use them with the headset, thanks to inserts provided in the foam for the frames.

Check out the best HTC Vive prices on Amazon

The design of the Vive controllers is excellent. In addition to being pleasant to hold, their motion detection and integration into the virtual world are almost perfect. Your movements, even the more subtle ones, are always recognized. All the buttons are intuitive and easy to reach, and the large track-pad on the joysticks is very useful as well. A small white dot tells you where your finger is, and clearly limits handling errors. The trigger on the back is also easy to reach and use.

One of the best features is the interaction between the controllers themselves. Reloading a shotgun or bending a bow with a realistic movement greatly enhances immersion. All in all, the Vive’s controllers are sophisticated and perfectly satisfactory. 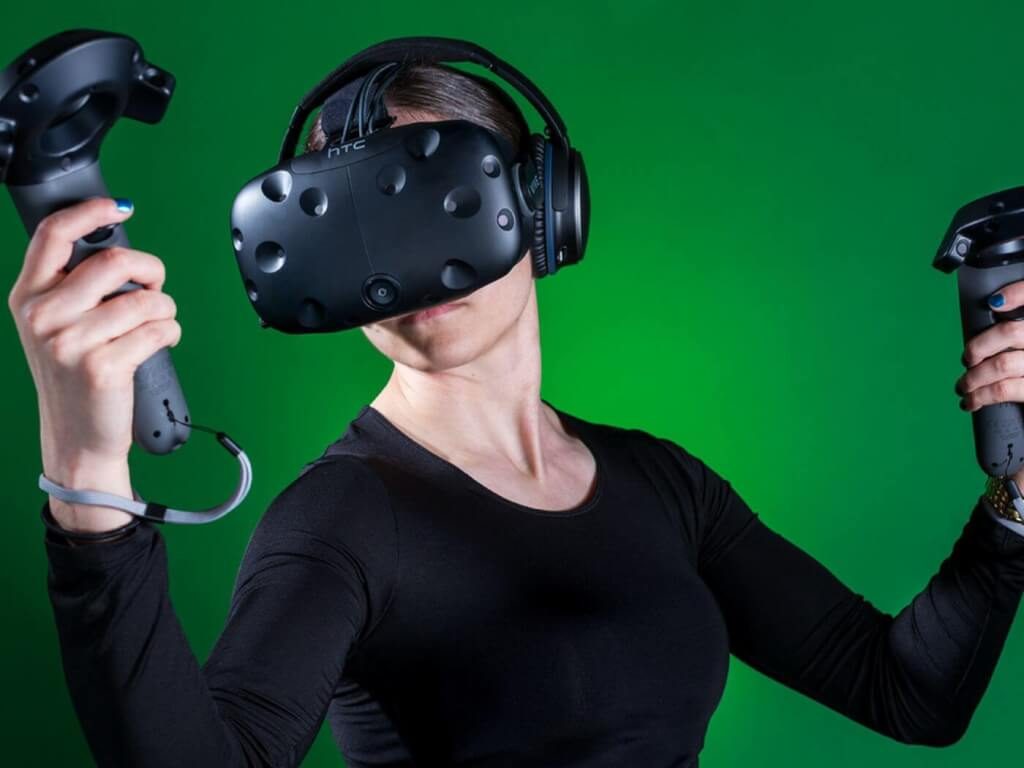 The laser sensors are very well attuned to the device. However, one will sometimes need to re-calibrate the room, which should take no more than a few minutes. The length of the wires is more than adequate to most gaming sessions, though one has to set them so that they don’t get tangled in the feet.

If there’s any cause for complaint with the headset, it would be the wires. Indeed, just about the only negative aspect of the Vive are the cords and connections that link the headset to the PC. One has to be careful not to entangle one’s legs in them while using the headset. However, with TPCAST as an available third-party solution and an official wireless adapter due to come out soon, that issue will most likely be a thing of the past. 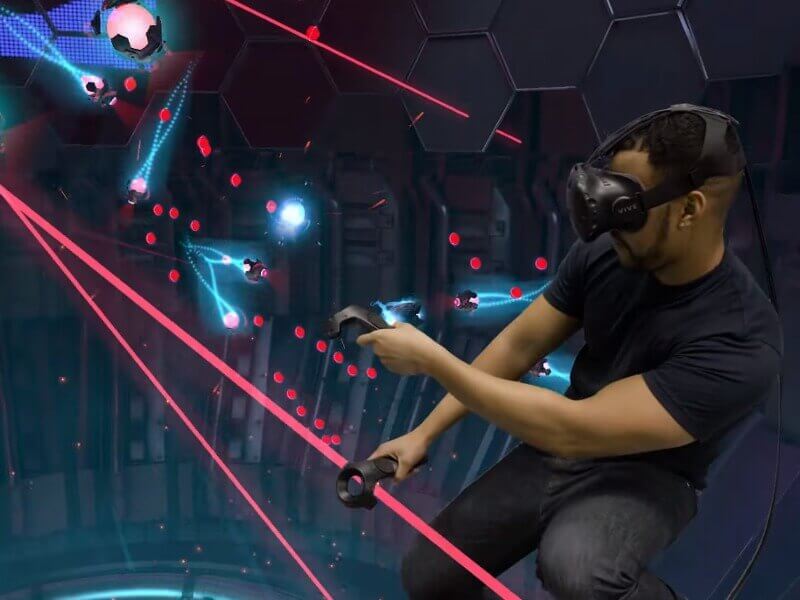 The integrated camera allows one to ‘check up on’ the real world at any time without having to remove the Vive. Simply press the menu button that returns one to SteamVR (without exiting your game), and then activate the front camera of the headset. The built-in camera allows you to look around, to avoid a cat trying to trip you up or to pick up a drink from your desk.

So, as far as the hardware is concerned, this headset is one of the absolutely best on the market, and a premium buy.

Remember Alice in Wonderland, and the strange realms she found on the other side of the rabbit hole? Buying a Vive is an experience that could rival that one in magnitude.

So let’s follow the white rabbit down the rabbit hole…

We never heard that Alice complained about her jaunt in ‘virtual reality’, and it’s unlikely that you will either. If the Vive promises immersion, it delivers on that promise. Whatever the game chosen, one finds oneself caught up in the action. VR has the undeniable advantage of keeping you moving, unlike the previous generation of games, which tended to ensure that users chronically slouched on their sofas, or in front of a computer screen.

There’s a vast range of content available for the Vive. Here’s a small selection of the titles available today…

Time Machine VR, an exploration game that takes you into prehistory

Time Machine VR takes place in Norway, in the near future. The player must return to prehistoric times to collect data on all creatures her or she encounters along the way. For good reason, as it turns out, as humanity is about to disappear because of a prehistoric virus, and this data may be able to create an antivirus. Implausible, but in the game universe, supposedly the honest truth. Nevertheless, it makes for an engrossing game.

In addition to the story mode, an Exploration mode allows you to return to previously visited destinations to let you take your time exploring and collecting data. The controls of the game may seem strange at first glance, but help make the experience unique and original. A spectacular exploration game, available on Steam for € 22.99.

TheBlu is one of the most immersive and impressive HTC Vive experiences of the moment. There are three scenarios available, including an encounter with a whale, a journey through coral reefs, and a trip into the deep abyss. Each of these is unique and very engaging. The environments are detailed, and the sea creatures very realistic. A game for virtual underwater explorers, available for € 6.99 on Steam.

The Solus Project – Survival in an alien realm

The Solus Project is a survival game like no other. You find yourself on an alien planet with sublimely artistic scenery and will have to try to find food and shelter before thinking about how you could escape this beautiful but essentially hostile environment.

Enemies are present, but you are encouraged to avoid them, because engaging them will often result in the death of your character. That makes this game a great deal more realistic than most ‘superhero’ shooters. A poetic, realistic game, where the tension is so palpable that it guarantees immersion. The Solus Project is available for € 18.99

Vanishing Realms was developed exclusively for virtual reality by Indimo Labs. Armed with a sword, you explore a mysterious world filled with fantastic creatures. While quite a few of those creatures can prove to be major nuisances in close proximity, the appeal of the game is undeniable. Available for € 19.99 on Steam.

Fallout 4 is certainly one of the best FPS / RPGs of all time. Developed by Bethesda, this game offers a vast world to explore freely, thrilling quests, and a dynamic and captivating combat system. In Fallout 4 VR, the player can immerse themselves in a stunningly realistic virtual world of first-person role-play. You can find it at a heavily discounted price on Kinguin.

In Superhot VR, time stops as long as the player does not move. Thus, the player must take the time to examine his or her situation and then down several enemies in a row using firearms or decorative items.

With its innovative gameplay and stylized graphics, Superhot VR is already a very good game on the PC, but takes a whole new dimension in VR. The player must actually bend down and lean over to dodge enemy shots, which is all rather reminiscent of the movie Matrix. An indispensable game for the VR enthusiast. Discounts available on Kinguin.

In this game, you will play a mercenary who finds himself on a hostile island populated by dinosaurs. Arm yourself to survive, and enter a universe where the dinosaurs are so well modelled that you will truly fear for your life. Island 359 is available for € 19.99.

Ah, but you’re one of those who prefer space exploration sagas? The Vive has that covered as well…

Despite the fact that it is not specifically created for VR and the HTC Vive, Elite Dangerous tends to make the most of the Vive Headset. It allows for graphic immersion in what is a classic space opera. The graphics are exquisite, with everything from the space stations you dock with to the controls of your spaceship being brilliantly rendered. Elite Dangerous VR is available from €17.99 on Kinguin.

If you have just about any of the major VR headsets, you can play EVE Valkyrie multiplayer, and this game is truly worth playing. It takes the legendary EVE series to a whole new level. Join galactic pirates or those who combat them, upgrade your ship and explore a vast and engaging cosmos. The graphics are sumptuous, and the immersion legendary. It’s a progressive game, allowing you to level up and improve your character and your starship. Latch on to this one for days of immersive gaming. Available on Kinguin for heavily discounted €24.99.

Now you understand the lure of the Vive, young Padawan…

The vast range of quality content available for this platform, combined with the excellent visual quality, tracking and comfort levels of the headset make this one of the best virtual reality experiences in the world today. And that’s if you don’t spring for the Vive Pro, which is even better.

If you want one the best possible VR experiences on the market without bleeding your wallet dry, this is it. Best bang for the buck out there.

Get HTC Vive now via Amazon