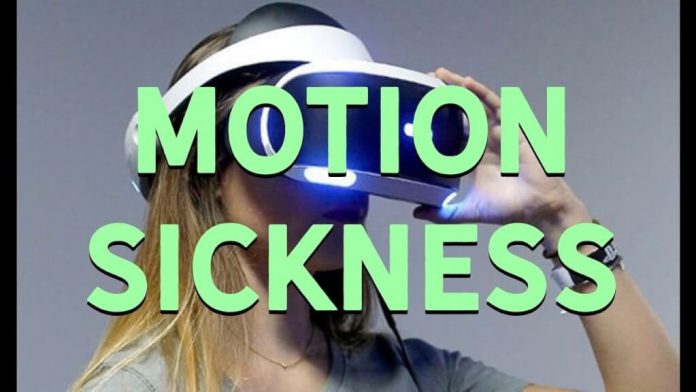 What is motion sickness

Motion sickness is a feeling characterized by nausea, dizziness and the general feeling of discomfort. The cause of which is deeply ingrained in the technology of VR. When you put on the headset, it displays images to the screen in such a way that the brain processes them as 3D objects, giving you the feeling of depth and immersion unlike any other.

But therein lies the problem, since our brain can process images much faster than today’s hardware can render, the brain senses that something is amiss. The brain is trying to align its own prediction of position with the one displayed by the monitors, and inevitably finds incongruity.

For example, if you are in a VR game where you are running, jumping or doing some other acrobatics, but the body in the real world is stationary, the brain is confused, and after some time the feeling of dizziness ensues.

We are bound by the limits of today’s technology, but in the future when the displays and hardware gets powerful enough, as well as with the introduction of new technologies which will allow for extra sensory input, the feeling of immersion will be greatly increased and with it the lessening of the VR induced motion sickness.

Also, VR headsets are less forgiving with lower frame rates, since it is estimated that brain’s “refresh rate” is comparable to something around 90Hz, anything less than 60 Hz truly diminishes the experience and causes greater motion induced problems.

As we said earlier, not all people are equally susceptible to motion sickness. Some theories suggest that people with the greater ability of mental rotation (visualization technique) are better at lessening the discrepancies between the displayed image and the one brain has conjured up.

VR induced motion sickness is something that has been plaguing VR enthusiasts since the advent of Oculus Rift, the first commercial VR headset. But not all people are equally susceptible to it, some are quite proud of their VR legs. If you wish to put your skills to the test, for any reason that may be, be it to induce new crazy experience, or just for fun, we won’t judge you. Here are three games that are up to the task.

The greater the freedom of movement and greater the rotation, the greater the motion sickness. This free demo game puts you in the backseat of a futuristic car and gives you the freedom to drive around in Blade Runner influenced scenery. As you might imagine, you can move in all directions while in the backseat of your car, but the added freedom will prove challenging for most. Although the visuals and scenery are beautiful, after a while even the most resistant ones will get dizzy.

Think you can handle it? Try it yourself.

Now, this is one beautiful survival game. You are space explorer who has arrived on the sea surface a beautiful alien planet, and are tasked with exploring its depths and managing your ship. The visuals are stunning, the artwork is beautiful, audio background truly captures the feeling of depths and might even scare you a little if approached by the unknown predatory fish from behind.

The most beautiful part of Subnautica is the swimming and exploring that is offers, but it is also precisely the reason why it is included on our list. The tricky part of your brain is to align the feeling of swimming underwater, which is done beautifully, with the fact that you are in fact standing on solid ground. None the less, this game is worth taking into consideration for any fans of survival, if only for its beautiful aesthetics and graphics.

This is a game recommended only for the most battle-tested of VR veterans. The premise of the game is that you are abandoned on a huge mining rig, and are tasked with different challenges which will ensure your survival. The scale of the game is huge and truly captures the feeling of loneliness one might encounter while on a huge space mining station. The audio elements complement this atmosphere beautifully. You are free to move in all directions, such is the case with zero gravity. However, sudden turns and not knowing which way is “up” ( there is no up in space) will get you dizzy extremely fast.

The game is released for HTC Vive and Oculus Rift and offers the multiplayer option. Sadly, you might find yourself unable to connect with other players for a multiplayer experience. It’s a shame, as a great deal of care was taken by developers to truly make it into an immersive space fairing experience.

Hopefully, these three VR games will prove the challenge to you, since they offer a quite large range of movement which will prove hard to master. Even if you are proud of your VR legs, you just may have come across a worthy foe to test them!