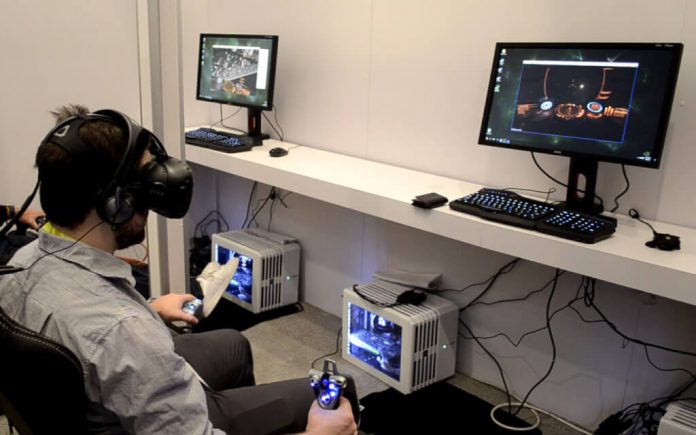 The VR has brought with it new worlds to explore, many new experiences for everyone to enjoy, and it also gave us the opportunity to truly traverse while inside them.

But, perhaps you are not a fan of unnecessary workout and you have a better experience while sitting down or you have a limited room to play in. If that’s case, here is our pick of the 8 best seated VR experiences.

Have you ever wanted to be an astronaut, but discouraging environment and other hindrances have stopped you? Shed no tear, for now, my friend, you can experience the moon landing through the eyes of people who made the greatest journey known to man.

Apollo 11 is more of an experience than a game, and a thrilling one at that, for the first time with the help of VR technology, you can visualize all the little intricacies that go together with being an astronaut.
From the devices they used to the to the rocket itself, Apollo 11 make the journey alive and you a part of it.

You can choose betw3een two modes, first one is more of a cinema experience and the other is a bit more interactive where you have to take care of the different tools onboard to make sure that everything is functioning properly.
Either way, you choose, you’re in for a thrill.

From the vast emptiness of space, we come to the almost limitless ocean and all the hidden secrets underneath the surface.

If you have wanted to swim with the blue whales, the largest of animals on the planet, or have wanted to relax in the depths of the coral reef in the company of colorful fishes, dive into the sea with theBlu.

This is the best meditation experience on VR headsets out there. Now you don’t have to climb the Himalayas in search of Tibetan monks to unlock your hidden abilities buried within, you can simply choose between the imagery that best suits you and listen to the soothing voice while the sea crashed on the surface and guides you in the most hidden areas of yourself, all in plain sight for you to explore.

Once you had enough of the more visually stunning, relaxing experiences and are in need of something that will get your blood pumping, pick up this fantastic space simulator. You pilot your own ship and take care of everything that goes with it from trading, pirating and taking down enemies in this massive sandbox placed in the vastness of space.

Elite Dangerous has existed for quite a while before being released for VR, and the fact that it is not built from the ground up with the VR headset in mind comes with some problems as well. Mainly, the huge draw distance where you can spot enemies kilometres away, coupled with the limited graphics of HMDs’ will turn enemies on the horizon to blurry spots and will have you guessing.

Other than that, the gameplay is incredibly immersive (you can even download a voice pack that lets you talk to the computer directly) and quite challenging. Even docking your ship will take a significant amount of practice, but that is also a part of the charm.

When looked upon for the first time you might say that EVE and Elite are quite similar, but you couldn’t be further from the truth. The only similarity is that both games are set in space.

While Elite is the sandbox game that features many different operations carried out by the owner of a spaceship, EVE: Valkyrie focuses exclusively on the dog fighting and the thrill of outmaneuvering your opponent to get the best out of him.

It is simply the best experience for anyone in love with the science fiction games and a star wars franchize. You truly feel as a pilot of a spaceship while you dodge and shoot at your many opponents.

If piloting spaceships is not your cup of tea and you prefer a more grounded experience, pick up Dirt Rally from the shelves and join the ranks of professional auto drivers in this driving simulator.

Unlike your typical car driving game, where you have to unlock race types and different vehicles, this game requires proper team management, as well as ensuring that sufficient level of detail was paid in repairing your car between races. With that taken into consideration, it may be the most accurate simulation of real rally experience.

In addition to the carer mode, Dirt Rally presents far more wealth in its game modes. You can choose player vs player online racing, multiplayer tournaments, as well as a co-op mode. You might say that VR was built for this. Strap on your buckle, put on your headset and watch those turns cowboy, you’re in for a ride!

Yet another game on our list which is best played in a party of friends, Star Trek is a treat for any Trekkie, or for anyone for that matter, in love with the thought of humanity traveling across the stars.
Team up with friends in co-op mode or choose between different players in multiplayer modes and choose your role on AES Aegis, on your mission to go boldly where no man has gone before.
Fight space pirates, explore new stars, meet interesting and strange civilizations, the space is the final frontier.

Chronos is an Oculus Rift RPG exclusive that utilizes the vastness of environments and the level of immersion only capable of VR. It is a mix of puzzle game adventure and classical RPG dungeon crawling game, peppered with a unique mechanic of aging.

Each time you die, your character forcibly ages one yea. With this aging comes the change in gameplay, since your once teen is forced to rely more on arcane knowledge. This becomes the only way to best his opponents as he turns into an old man.

The formula is simple – kill the guards, eliminate the boss. However, there are countless hours of wonder-inducing gameplay as you traverse across the fantasy-filled world and journey into the unknown realms through inter-dimensional gates.
The items you found in one level will prove to be useful in the next world, so don’t be confused at first, the entire world is one big puzzle waiting for you to solve its mystery.

If playing while seated is your choice, be it because you get motion sickness faster or are other side unwilling to play games while jumping or dodging, this list has a wide array of experiences for you to choose from many of which will have you glued for hours.
Try them yourself!