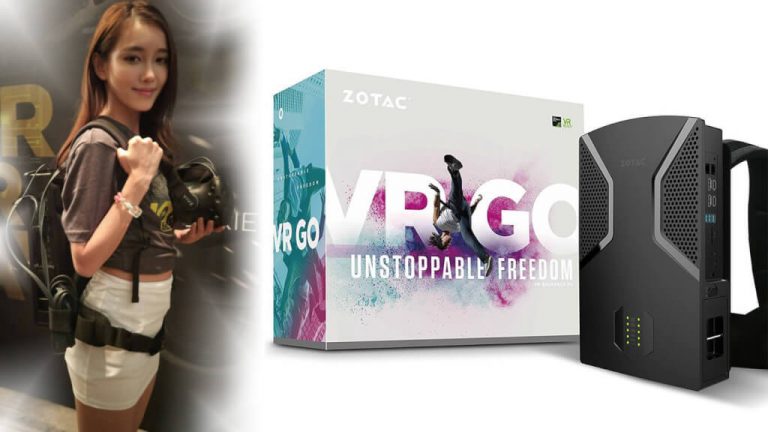 The new VR backpack PCs are really one of the finest innovations in virtual reality technology today. For those who are interested in VR technology primarily for gaming, one of the best backpack PCs available today is the Zotac VR Go. It has some very interesting specifications. Its heart is an Intel Core i7-6700T processor, with 16 GB of RAM and an NVIDIA GTX 1070 graphics card. It also has a 256 GB hard drive.

The Zotac VR Go is an exceptional personal computer in more ways than one. In one sense of the word, it’s a traditional graphics PC, but exceptionally compact, so much so that it is hardly bigger than a home console. It is exceptionally powerful and absolutely suited to video games, and of course, to virtual reality.

The word “Go” in its name refers to the fact that it is possible to wear this personal computer as a backpack, and also to connect it to an HTC Vive. Its two removable batteries hold a charge that allows it to function for about two hours. Moreover, the VR Go can be used as either a fixed PC, functioning on a mains power supply, or as a mobile virtual reality PC or workstation.

In being so, the Zotac VR Go solves one of the crucial problems facing virtual reality today, that of the endless amount of cables that haunt just about every high-end virtual reality headset on the market. These cables tend to wrap themselves around people’s legs or torsos, to trip them up, or to yank themselves out of the headset or the PC. Either way, they are a pure nuisance and a definite detraction from one’s immersion in virtual reality. 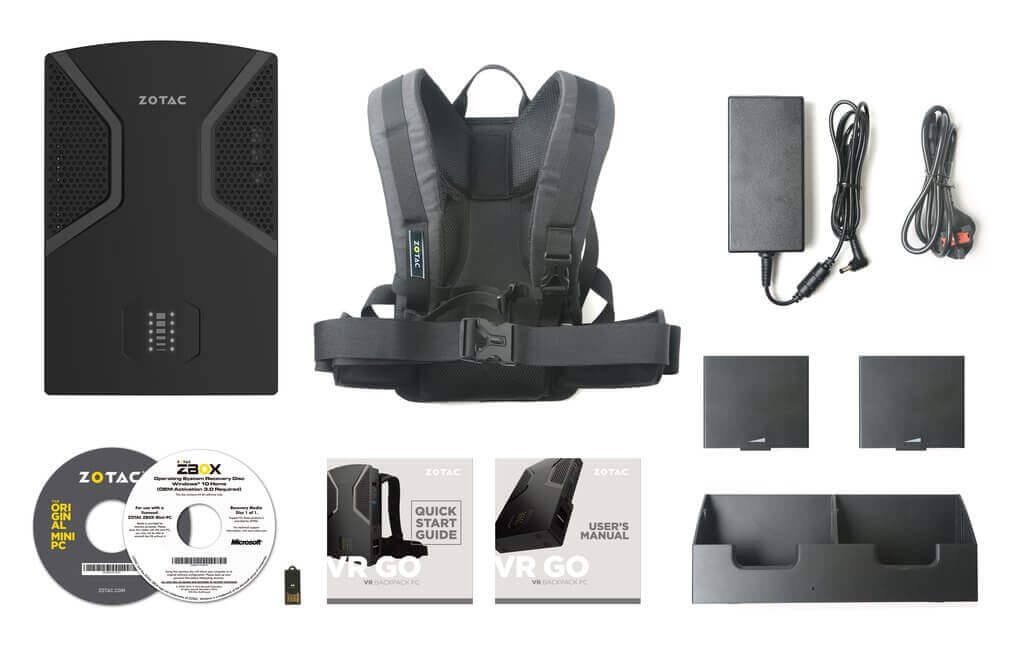 Well, perhaps ‘impact’ wasn’t quite the word to use here, since I seriously doubt that this PC would survive a severe impact. This isn’t to say that it isn’t ruggedly built, because it is. However, I wouldn’t subject it to any abuse if I were the owner of it.

The design of the case can be considered rather a classic, with a dominance of black plastic. It’s rather Spartan in its simplicity, and the only spikes of colour come from the start button on the side, and a panel that shows how much charge remains in the batteries. The materials used are strong and yet extremely light, and while we doubt it should be subjected to a hard blow, on the whole, the construction seems relatively solid, despite the predominance of plastic where fibreglass or metal might have been more durable. It is hardly bigger than an Xbox.

Basic connectivity with the HTC Vive is through the top of the case, making access easy. Note that the small box that usually connects the headset to the PC is no longer needed here, as all power is sourced directly from the Zotac.

Other connectors required by the headset are arranged along one side of the Zotac. There are four USB 3 ports, two HDMI ports, two display ports, two Ethernet outlets, and an SD card reader. There are also ports for your headphones and a microphone.

The back of the case is what attaches to the backpack section of the Zotac VR Go, and the attachment is via a swivel button. Once you fit the straps to your person, the case is perfectly stable, and there are no safety concerns, and no danger to the backpack PC – unless you happen to fall heavily right on top of it. However, in testing it in use, we found that this is extremely unlikely to occur.

The Zotac VR Go’s Intel Core i7-6700T processor is a four-core CPU that clocks between 2.8 to 3.6 GHz. With 16 GB of DDR4 RAM, you’ll see an excellent performance in most of the VR games that you play. While the VR Go is really aimed at the VR gaming market, it is also perfectly capable of handling professional applications, including 3D modelling programs like 3D Studio Max and Maya. It can also be used for video editing, but the fact that it only has a single 256 GB SSD can limit this to some extent. If video editing is what you buy this PC for, you will have to upgrade the memory using the bay provided for a hard disk.

As you can imagine, with the specifications we’ve outlined, the Zotac VR Go is an excellent gaming machine. NVDIA’s 1070 graphics card is powerful enough to give you 90 frames per second with the majority of virtual reality games presently on the market. Note that this version of GTX 1070 is the “mobile” version, and therefore similar to the one found in laptops.

There is little difference between it and the desktop version, performance wise

The frequency of the mobile version of this GPU has been revised downwards slightly from 1506 MHz to 1442 MHz. Despite that, it has a larger number of calculation units, that is to say, 2048, against the 1920 calculation units of the desktop version. As far as performance goes, it is roughly equivalent to a notebook PC with similar specifications.

As an example, you would be able to play The Witcher 3 in full HD, that is to say, at a resolution of 1920 by 1080 pixels, with the highest level of graphics detail that the game has to offer, and you would still get frame rates ranging at around 70 frames per second. 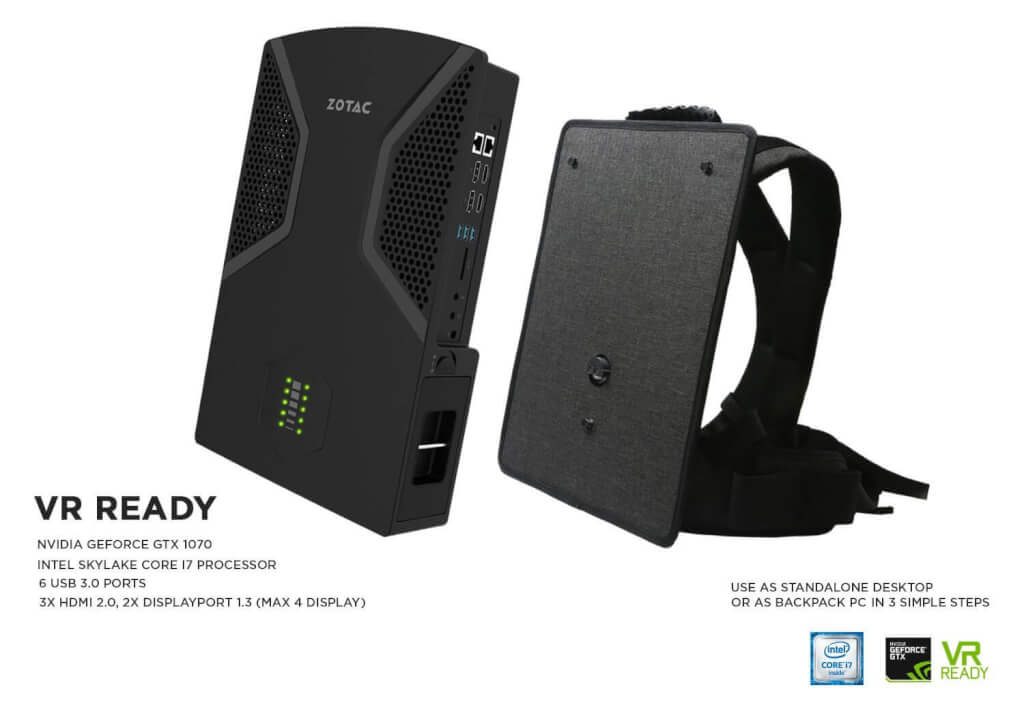 Can this PC be upgraded?

Yes, the VR Go can be upgraded, but not all of those upgrades will be simple, and some of the possible upgrades are a little limited. Accessing the RAM and SSD is fairly simple and can be done by unscrewing five screws in a small trapdoor in the case. The same panel allows access to a bay that can hold a SATA disk. This bay will fit either a hard drive or an additional SSD.

However, if you want to actually access the motherboard, you will have to remove all twelve screws in the case, which gives you access to it, as well as to the GeForce GTX 1070 graphics card. This graphics card is mounted on an MXM module and is therefore quite difficult to replace. The update kits for this sort of mounting are quite rare and rather expensive. There is also an Intel Core processor, an i7-6700T. This is mounted on an LGA1151 socket, which is quite standard, and which will allow the processor to be upgraded quite easily.

How comfortable is this VR backpack to wear?

Well, the backpack is rather light, weighing in at just 2.5 kg without the batteries, and at around 4.2 kg with them. However, if you factor in the weight of the HTC Vive as well, you’ll be carrying around 5 kg on your person.

In practice, though, the backpack and the headset go very well together, and the weight is so ergonomically distributed that one hardly feels it at all. The straps are well padded, and one feels almost no fatigue.

Of course, as this is virtual reality, so how fatigued or otherwise you feel will depend on the game you play. If you play a very active game, where large and fast motions are required, you’re of course going to get tired rather quickly. However, this would be true even if you were using the HTC Vive on a normal PC. On the other hand, when playing a game like Arizona Sunshine, you should feel very little fatigue. 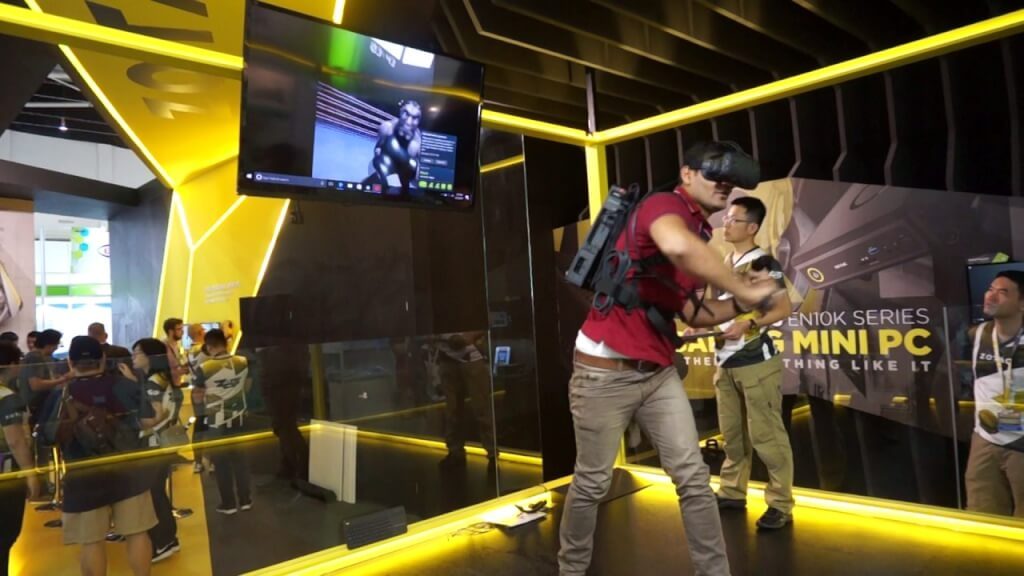 Does it get hot on one’s back?

You might be surprised to know that despite its powerful configuration, the VR Go makes very little noise and manages to dissipate heat impeccably. Most of the hot air is flushed out to one side of the case, keeping the rest of the body at a decent temperature, and ensuring that you don’t feel the heat on your back. The range of temperatures remains between 36.2 C and 38.9 C. The sound generated by the cooling fans is virtually inaudible, unless you actually put your ear right next to the case.

The VR Go comes equipped with two removable batteries that can keep it going for two complete hours. The batteries can be interchanged while the computer is operational, ensuring that you don’t have to interrupt what you’re doing when one of the batteries goes low on power. They are recharged via a dedicated dock, which is powered by the same AC adapter as the PC.

The only negative point here is that you cannot recharge them if you happen to be running the PC on mains power using the adapter. That is rather a pity, but other than that one point, it’s a very workable and satisfactory system.

It might interest you to know that field-tests of this device have found it running far beyond those specifications, with reviewers using this backpack PC with the HTC Vive reporting that they were able to use it nearly for two hours and twenty minutes before the PC shut down completely. Another reviewer reported that he was able to take a game up to half an hour beyond the two-hour limit before the PC shut down. 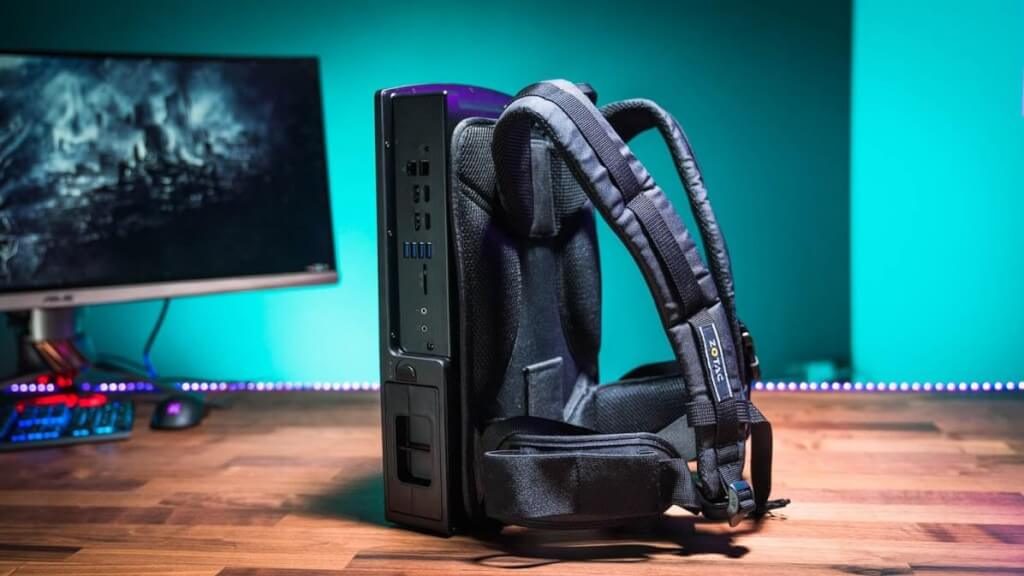 The cables of the Vive persist… to some extent

We might point out that the cables of the HTC Vive, being long, tend to hang down behind one. However, this can be dealt with by folding the cables into a bundle using a clasp.

It certainly does. Note, however, that you will experience a considerable level of distortion if you set the volume of the sound to maximum. However, if you reduce the volume slightly, say to around 94%, the distortion you will experience is minimal. Other than that, you should have few complaints as to the audio, with the power output being perfectly acceptable, and the entire sound spectrum being very well defined.

This is an excellent example of a compact and wearable backpack PC that dispenses with the irritating headset-to-PC connection that is the bane of high-end VR headsets today. It is also reasonably light, even when you take into consideration the weight of the headset. One can certainly use the HTC Vive with this backpack PC for two hours without feeling any exceptional fatigue. If it falls within your budget, it is definitely worth purchasing.

Click here to order your own Zotac VR GO