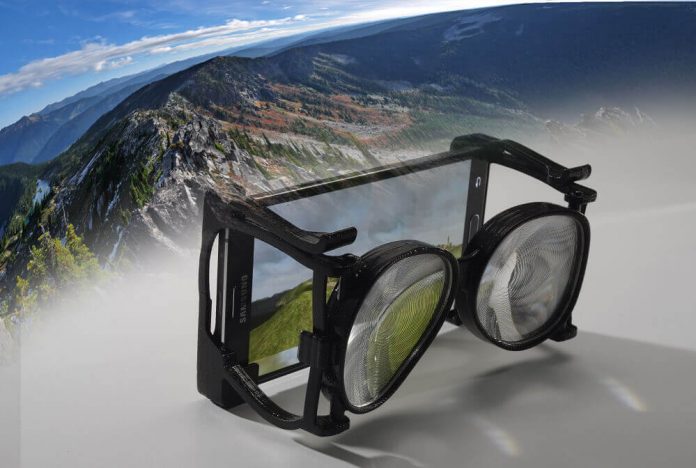 While most VR systems today tend to provide a standard 110 degree field of view, and those systems that promise wider FOVs are mostly prototypes-still-in-development, a ‘wide field’ is something that the Wearality Sky actually delivers on. Wearality Sky offers a field of view that covers 150 degrees, which is exceptional for any VR device today. This superb FOV is created by special Fresnel lenses. Since the Wearality Sky are mobile phone based VR goggles, it is also rather economical, and the device costs a fraction of the price of‘dedicated’ VR headsets.

Wearality Sky is little more than a pair of complex plastic lenses in a frame that latches on to your smartphone. The goggles work with just about any 3D video or Google Cardboard app. However, the lack of casing does provide one distinct advantage – the device can actually fold away into your pocket, rather than having to be carried around in a special case. The fact that the Wearality Sky can so easily be folded up makes the lenses more resistant to getting dirty and scratched as well.

The team behind the technology

Wearality Sky is the creation of a highly competent technical team. Wearality’s CEO, David A. Smith, is in charge of innovating new technologies at Lockheed Martin. Smith is often seen at VR exhibitions, introducing Wearality Sky models with different fields of view – both their original model, with its 150 degree field of view, and a new prototype that offers a 180 degree FOV.

Mark Bolas is the team’s technical advisor, and has been associated with projects run by USC’s Institute for Creative Technologies. Other big names are the reputed computer specialist Alan Kay, and the founder of eleVR, Vi Hart.

A new milestone in VR

The patented Fresnel lenses used by Wearality Sky tend to provide a rather optimal visual experience in VR. The Wearality Sky offers reduced weight, an enhanced field of view, a very compact pair of VR goggles, and high levels of visual fidelity, all of which – put together – is really quite impressive. The device offers excellent visual clarity, quite on par with most other equivalent headsets and goggles. The lenses of most VR headsets tend to distort colors around the edges – this is an effect of the sophisticated lenses used in these headsets. However, Wearality Sky seems to reduce this to a considerable extent as well.

The Fresnel lenses themselves are said to be an offshoot of technology used within the aerospace company, Lockheed Martin, that provides the U.S. government with military technology. The company’s Kickstarter campaign did very well, incidentally.

When you first put on the Wearality Sky, it doesn’t look too expressive. This is because the device has options for different fields of view, all keyed to a special app that Wearality has designed. The app allows for incrementally wider fields of view, so you may not be too impressed the first time you look into a Wearality Sky. But adjust the field of view, and you’ll be astounded. It widens, cycling through higher and higher fields until you’re looking at an astounding 150 degrees that gives you a real feeling of ‘space’.

When set to the maximum field of view that the device can provide, the VR experience provided is truly impressive. The wider angles are certainly far more immersive, and provide for a much greater level of realism. With clear images no matter in which direction you look, the Wearality Sky provides an experience like no other. Here’s a look into a Wearality Sky…

It’s rather a pity that this brilliant lens technology is coupled to a mere mobile-phone headpiece, rather than to a sophisticated system of high-resolution screens like that of the Oculus Rift or the HTC Vive.

Check out Wereality Sky on Amazon

These Fresnel lenses allow for less space between the device’s screen and the lens, allowing for far more compact VR devices. However, Wearality is also working on a sophisticated new prototype lens that will be even thinner and lighter. The new lens is thinner than the average small coin. Not only will this reduce the weight of the VR devices of the future, but it will further reduce the distance between the lens and the image-generating screens, allowing devices to become even more compact. The VR devices of the future may be just as compact as the average ski mask. The new lenses will also allow for fields of vision that expand to an astounding 180 degrees – a good deal closer to the human field of vision, which ranges at around 220 degrees. 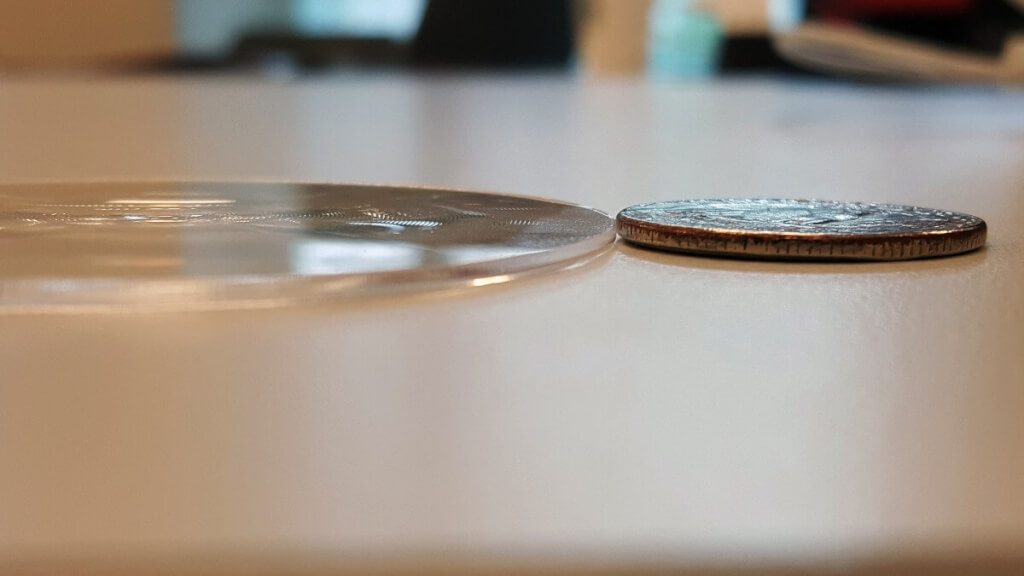 While using Wearality Sky, unlike some of the VR headsets out there, one does not feel as if one were suffering from tunnel vision, limited by the small field of vision that one has to look through. In fact, if you try using an older model of mobile with it, or one with a smaller screen, you might find that your smartphone’s screen falls short on size due to the field of view offered by the goggles.

One intriguing aspect of this VR device is that it isn’t enclosed in the usual casing that VR headsets use to prevent light bleed. Oddly enough, the goggles work perfectly well indoors, and one doesn’t notice any significant levels of light bleeding in from the environment. However, the stretchable cloth cover that’s provided with the goggles can quite easily block out higher levels of ambient light. Not only does this arrangement let one feel less ‘enclosed’ than with a conventional headset, but one avoids the high levels of heat and humidity that are such a bane to the conventional headset.

Another advantage of the Wearality Sky is that it can be used with phones that have a large protective casing. You’ll find that the phone fits very easily into the goggles’ frame without forcing you to remove the casing every time you want to use the device. If you have a smaller phone, there’s an adapter provided with the goggles that will allow you to use it, though it goes without saying that the smaller screen will limit the wide field of view that is a trademark of the device. 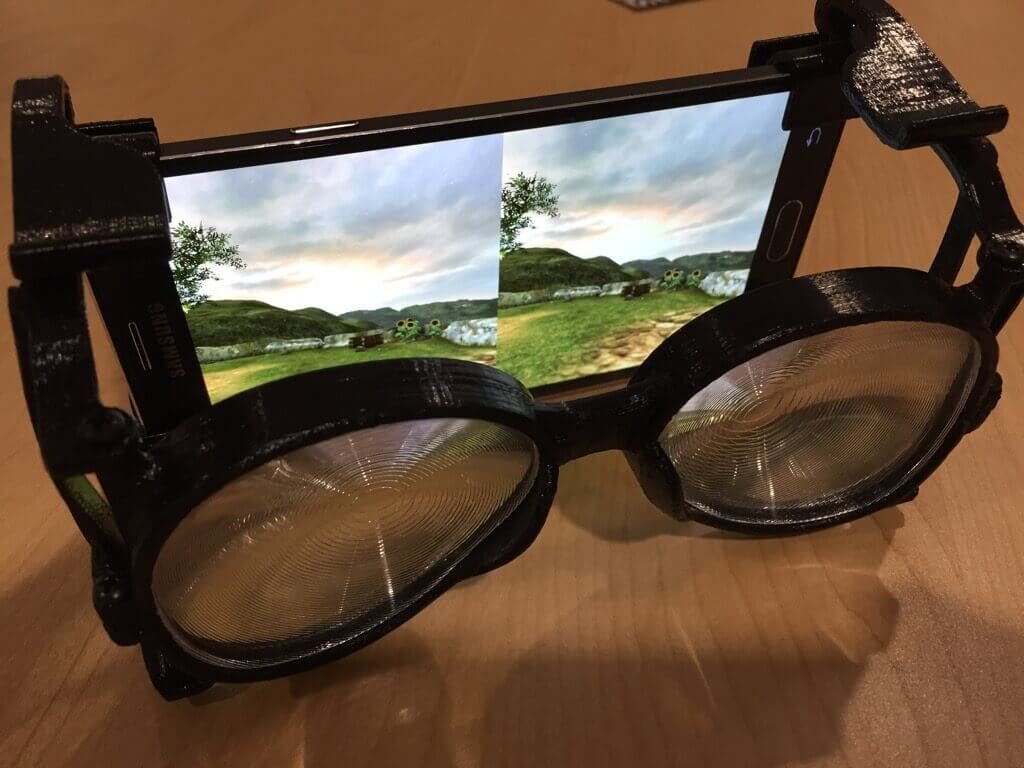 Precautions when using the Wearality Sky

You must never clean the lenses by immersing them in water. This is because (in the case of each of the device’s lenses) what seems to be a single lens is actually two lenses that are clamped together. This means that the device actually has four lenses. If you immerse them in water or in a cleansing solution, liquid may get between the lenses, and then you’ll have to dismantle the device to remove it. This isn’t hard to do, but if you do dismantle the device in such a situation, remember that the two lenses clamped together aren’t interchangeable.

One lens belongs in front, and one behind, so if you dismantle the device, you should put the ‘front’ lenses into a clearly marked pouch, and make sure they are in front when you put the device together again.

How good is Wearality Sky?

Very good, really, for a pair of mobile based VR goggles. It’s cheap, provides an exceptional field of view, and it actually folds down to fit in your pocket – something that not many other high-quality VR headsets can do. They’re also built to last, and, since they incorporate no electronics, and will probably outlast most headsets that do. Those who wear glasses will find that they’re not needed when using the Wearality Sky, as the device focuses the eyes perfectly. While the device has been built to fit a person wearing glasses, they have not proved to be necessary for anyone we had try the device.

Customer service with the Wearality Sky is exceptional. We had a small issue with the lenses, and customer support sent detailed instructions on how to dismantle the device, as well as sending us a replacement, which arrived in a couple of days.

All in all, Wearality Sky is an excellent buy. The mobile-based goggles provide perhaps the best experience of virtual reality in its class, and one that actually provides features that even the most advanced headsets today do not. Of course, the Wearality Sky can hardly complete with the Rift or the Vive for resolution, and – so far at least – the Rift and Vive can’t compare with it for a wide field of view. The Wearality Sky remains an exceptional VR experience – at least until the Rift or Vive upgrade their lenses to match it for FOV.

Click here to get your Wearality Sky goggles today