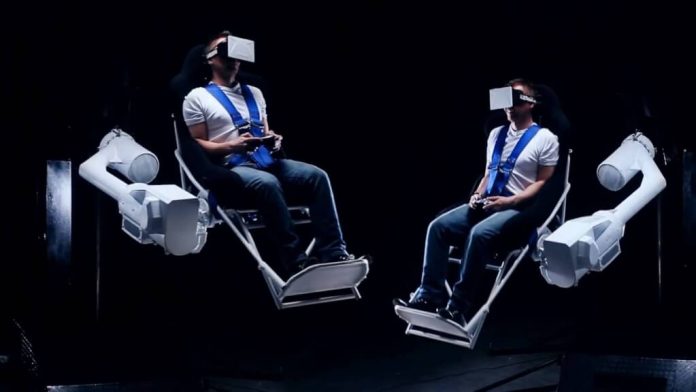 One of the problems of virtual reality is the recurrent motion sickness associated with the technology. A VR motion chair is one way to reduce these effects, because they actually turn you to face the direction in which you’re looking in virtual reality. This means that as the virtual world moves around you, so too do you, physically speaking. The inertia that you experience from the movement of the chair matches the movements of the virtual world, preventing nausea.

Most virtual reality chairs are motorized, and the controls of the motor linked in one way or another to either the VR software, or to the headset itself. A VR motion chair will also usually incorporate some external control mechanism, usually in the form of joysticks or pedals, though more complex controls are not unknown, as you will see as we go through various virtual reality chairs below.

There are a number of advantages to a VR motion chair

First of all, and perhaps the most obvious, is that you don’t have to stand all the time. While racing games or flight or space-combat simulators are perhaps the best suited to VR chairs, the fact is that just about any game can be played using them.

These virtual reality chairs might be the first step into ‘4D’ – that is to say, the chairs of the near future might be able to simulate wind, temperature, rain, and other environmental factors, to increase the immersion of your experience. 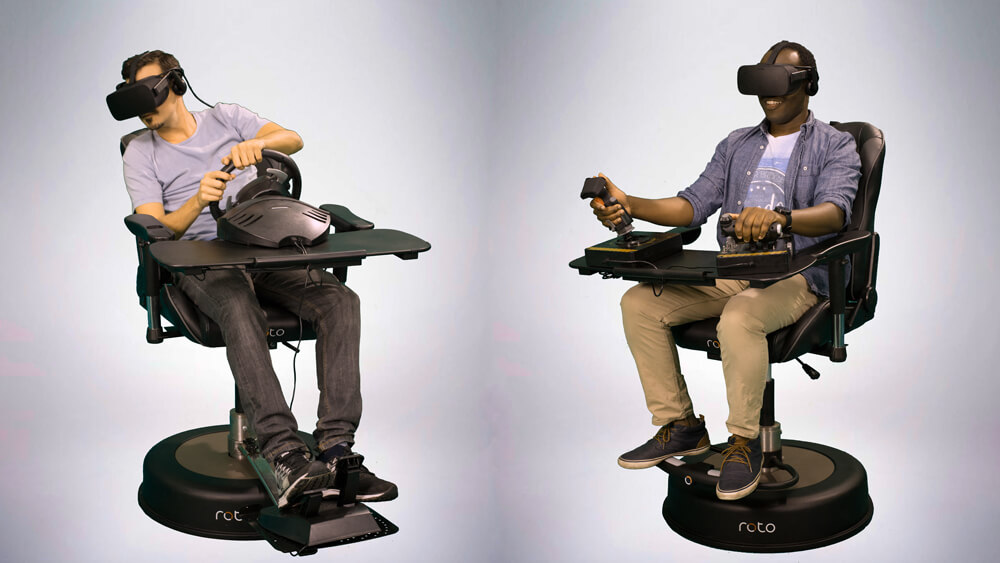 This is one of the most interesting chairs on sale today, and offers a design reminiscent of the classic DX Racer. It is powered by a motor in its base, and this can turn the chair in either direction. The Roto VR 360 automatically rotates to face the direction you look in – this is done using a sensor called the “Roto VR HeadTracker”, a small unit that you have to attach to your virtual reality headset. It transmits the movements of your head in real-time to the control systems built into the chair.

If you look to the right, the chair turns in the same direction, following the direction of your head. This module is stored in a special compartment in the chair that allows it to be recharged. Once charged, the control module runs for about six hours before it needs to be recharged.

There’s a powerful – optional – vibration system that consists of two 500W modules placed under the chair and at the back of the backrest. The Roto VR 360 has lots of possible ergonomic settings ranging from the management of the backrest to the customization of the seat or the height of the armrests.

The footrest has two “buttons” or pedals that allow you to move easily. They are most commonly set to forward movement (since turning is handled merely by turning your head), and to jumping.

An additional, optional accessory for the Roto VR 360 is the Cable Magazine, a system that allows you to avoid entangling the cables of your headset by allowing you to plug the headset directly into the top portion of the chair itself. This can be exceptionally useful when playing a combat flight simulator, for example. Not only does your VR headset plug in this way, but so do your headphones.

The chair transmits all the data it receives to corresponding ports in its base, which you can then connect with corresponding cables to your PC. This chair therefore provides an innovative and highly effective solution to the problem of cables getting entangled in one’s legs – or around surrounding objects – while one is in virtual reality. There are lots of other options that you can add to the chair to enhance your immersion in virtual reality.

A Ukrainian start-up has created the MMOne VR chair, a gaming chair for virtual reality that is actually able to move on different axes. This will allow it to create forces such as momentum and inertia, which is a big leap forward in virtual reality.

Virtual reality companies are often blamed for only focusing on  sight, and sidelining thee other senses. Mounted on multiple axes that can move and rotate independently from 30 to 360 degrees at variable speeds, the MMone allows the player to feel momentum, inertia and (as in a driving game, for example) the movements and shocks of his vehicle in play. While this chair would hardly interest a player of RPGs, it’s in its element with a driving game or flight simulator.

Eje, a company based in Japan, has developed the Telepod. This looks rather like those egg-seats you see in cinemas – the ones that specialize in 4D. 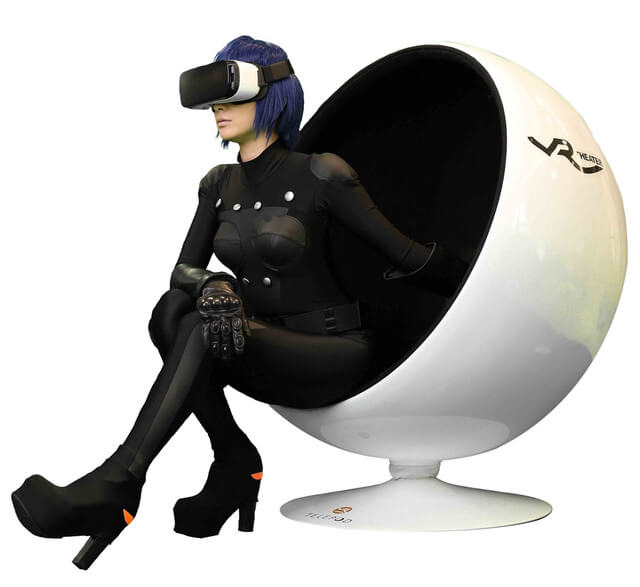 It has an interesting method of operation – the audio feed for a VR headset is plugged into the ‘egg’ (that’s as good a name for it as any), and it vibrates around you along with the audio, just like those seats in 4D movie cinemas. It really adds to the experience. But what about the audio for your games? Well, it’s sent back to you via an incorporated set of excellent headphones in the Telepod itself.

The VRGO – a brilliant innovation in VR technology

The VRGO is rather interesting. It looks like a stool, but it’s an advanced piece of VR technology. This stool can lean in any direction – and when it does, you move in that direction in virtual reality! You can also use the stool’s sensors to look around effortlessly in a 360 degree movie. Weights in the base of the stool keep it stable, and prevent you from falling over no matter what you do – within reason, of course.

This is an amazing simulator that looks rather like a half sphere. The Yaw motion simulator is exceptional in being the size of a chair, yet being able to simulate the complex movements of a starfighter – in the real, physical universe.

The Yaw motion simulator is nothing short of a work of genius, and if the company gets well and truly off the ground, will be in the living room of every VR enthusiast. It weighs just about thirty pounds, and can fold to become amazingly compact. Still not convinced? Take a look for yourself…

Liked what you saw? Here’s a video that showcases some of the VR Motion Chairs we’ve been talking about – and others.