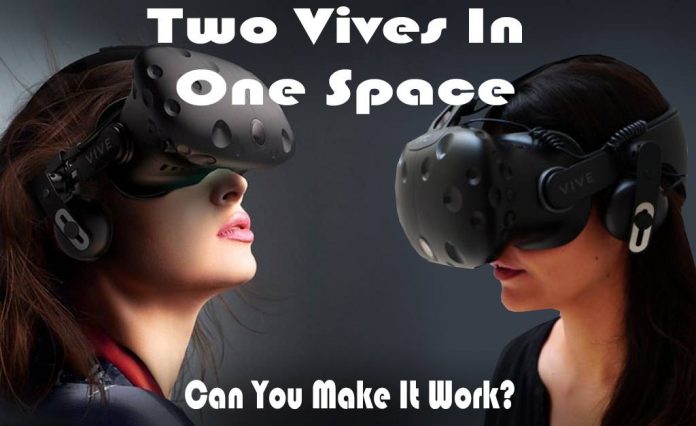 You can have (two or more) HTC Vives at the same time if you can get them to get along, and work out all the kinks in the relationship.

Oh, did I just say that?

I meant that it can be challenging for people setting up a space for VR to use two or more Vives in it at once.

It often happens that to save space, a person might want to set up two Vives, each connected to its own PC, in the same ‘active area’.

Could this cause problems?

Well, yes and no.

Let’s say you and your friend each bought Vives, and you want to use them in the same space. What would your experience be like?

The challenging test, of course, it getting the Vives to work in the same play-space.

Set up the Vives one at a time (we’ll go into this in more detail a little later), and go to it. They should work perfectly fine, except that you may have the occasional issue with tracking. I think this is due to each person in the Virtual Space momentarily blocking the other one. Very minor, really.

Each headset will reach out to the lighthouses, as well as interfacing with its own controllers. You might have one set of controllers tracking the wrong computer, but this is easy to handle – just exchange controllers with the other user.

But if you do set up the two devices in the same space, it’s loads of fun – a completely different experience from playing alone in an area.

Yes, accidents are the real problem with using two Vives in the same space. After all, two people, each with a VR headset on their heads – and effectively blind – are using the same play-space. In an active game, with both players moving around, it’s inevitable that their paths should cross – and they might have accidents. Not only could they hurt each other, but they could damage some of that expensive VR equipment.

This is the real reason why it’s recommended that you keep play-spaces separate. This is accentuated by the fact that lighthouses become much less effective as the distance from them increases.

The ideal method of dealing with this if you want to use the same space is to create artificial boundaries between the players so that there is no danger of them ‘making contact’. Simply place some furniture as a barrier between the play-spaces of the two players to enforce this in the ‘real world’.

The light-houses are just that – light-houses. All they do is send out light – it’s a very basic function. What this means (for our purposes) is that two headsets can easily ‘run’ off a single lighthouse. Because they are essentially such a simple device, it also means that one person could potentially ‘block’ a lighthouse, causing the tracking problems I mentioned earlier. Essentially, you – or your controllers – might ‘jump around’ in VR, or appear to be somewhere else from where they actually are.

The ideal lighthouse arrangement is to have two lighthouses where either player cannot easily occlude them – but not more!

Don’t use more than two lighthouses, as this has been known to ‘confuse’ multiple Vives and cause tracking problems.

Yes, if you set up more than two lighthouses, this can actually ‘confuse’ the Vives.

Reacting to Tracking issues when they occur…

Tracking issues are always based upon your respective positions, and you’ll find them repeating when you and your fellow-player are in certain positions in the play-space. If you note these positions and experiment with the positioning of the lighthouses, you should find that you can find a placement where ‘tracking problems’ are vastly reduced.

As I mentioned earlier, you need to find a placement for the lighthouses where you and your partner cannot block each other from either lighthouse – at least not for more than a few seconds.

Setting up a play-space with two Vives – Step-by-Step

You have to start with setting up one Vive. Set it up, and ensure that tracking is perfect before you go on to set up the second one. Here’s how you go about it…

You can have more than two Vives operating in the same space if you run them off a pair of lighthouses (but not more than two, remember?) – We’ve seen four run this way without problems, so far. It goes without saying that you’ll have to demarcate each player’s ‘territory’ – but do that and everything should work just fine. The Vives should operate with a minimum of tracking issues.

Remember, so long as you and your fellow players don’t actually batter each other in the real world by crossing into each other’s physical space, your Vives should have no problems sharing the same play-space.