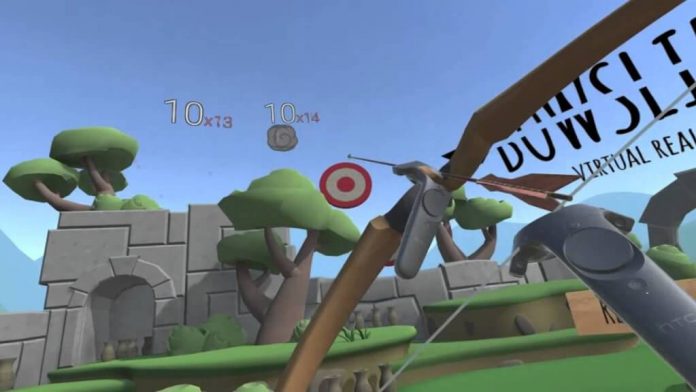 If you’re a proud owner of either of Oculus Rift or HTC Vive, by this time you must have been amazed by the incredible tracking technology they provide. The games developed for these platforms truly utilize them in marvelous ways, and archery games are no exception.

If you are fascinated by the bow and arrow, a simple, yet incredible human invention from the Neolithic times, which gave the primitive man the possibility of shooting targets from afar instead of charging them head-on with a spear, we bring you the list of games that will unleash your inner sharpshooting samurai.

The first on our list is the best starting point for any VR enthusiast. Valve’s The Lab gives you the taste of the all the different possibilities of VR. Archery games are one among them.

So, grab your bow Robin, there are some mischievously looking characters heading your way! The longbow game is of the standout experiences in The Lab, you stand as the lord atop of the castle and shoot down waves and waves of little stick figures that run by trying to get the better of you. As you progress, it gets more difficult since some of them wear armor which stops some of your arrows.

The mechanics are fluid and easy to grasp, but the overall static imagery and depersonalized enemies make it quite a dull experience after a while.

Dungeons crawlers are always fun, but VR dungeon and with a co-op mode to boot?
Simply amazing! Trickster is a procedurally generated wave shooter game where the objective is to guard the portal against those pesky orcs who want to invade your homeland.

The dungeon crawler is more of an arbitrary name since the levels are these floating islands with randomly generated terrain from where those green devils come out in droves and try to get the best of you.

Mind you, your sharpshooting skills will be taken to the test since orcs have a few tricks up their sleeves as well. From the armored enemies where you have to aim masterfully to hit the sweet spot with the magic-wielding shamans, you will hardly find a moment’s rest. And if they get up close, pull out your sword and shield and cut them down!

The game features a sort of RPG system, meaning that you will find new weapons as you progress through, so if bow and arrow is not your forte, you will find dual wielding crossbows to your taste.

The locomotion is done brilliantly in this game since you can choose from the option that best suits you, be it teleport or touchpads’ smooth motion.

The graphics are done well, they are well polished and very consistent although you may find loading times a bit longer than you would like. All taken into account, this is a must game for any fan of archery games.

Now here is a game that puts a little twist on classical wave shoot ’em up genres. Instead of positioning you at the point where you have to shoot left and right, Twisted Arrow gives you the ability to move around the map. Although the teleport system allows you only to move to predetermined positions, the feeling of freedom it gives is refreshing.

You are a cybernetically enhanced soldier equipped with a very special bow and a set of different arrows, all imbued with different abilities, from frost to pure mayhem inducing explosions. You will rely heavily on these as you progress through the game.

The bow can also serve as a console hacking tool and a shield which deflects projectiles thrown at you by your opponents, so timing between blocking and shooting is key as you move forward.

That’s likely the greatest part of this game. It’s a mix of shooting, dodging and deflecting all mixed with neatly using different arrows at your disposal. The cons are graphics which are pretty basic looking. Although you do have a greater degree of freedom, since you can move to various points, the fact that you cannot move freely around the city puts a constraint.

Welcome to true archery madness! Holopoint puts your archery skills to the test in this somewhat of a classic wave shooter game, but with way more fun and adrenaline. Move around, dodge enemy projectiles, slay menacing ninjas and swordsman and pump yourself up in this pure archery game.

The premise of the game is fairly simple, your job is to shoot down enemies which range from blue floating cubes to orange swordsman and menacing ninjas who throw shooting stars at you. You will have to dodge, move around and be precise, so it will really get your blood pumping.

Since you will be moving quite a lot, this game is optimized for HTC Vive. The biggest problem you will encounter is the cord strapping around you, which is something that can be taken care of quite easily.

As you progress through the levels, you will encounter wider variety of enemies and different bosses, with the added bonus of changing the scenery. In its premise, the game is quite similar to The Lab’s Longbow, but way more immersing and entertaining.

You controllers will vibrate as you pull the bow giving you the real feeling of pulling on a tight bowstring and the quantity and quality of enemies will have you on your toes at all times.

This is a great game for any archery fan.

QuiVR just might very well be the best bow and arrow VR game out there, and here is why. The premise of the game is simple, yet quite new. It is a mix of a wave shooter and tower defense game. Your goal is to guard the tower against various enemies trying to destroy your gates.

The movement is also fairly simple. You shoot arrows at different vantage points from where you have a different view on the surroundings and aim at the pestering creatures trying to get the best of your guard tower.

But the place where the game truly shines is the bow and arrow mechanic. The aim truly amounts to a great deal, precision is more important than speed. The tracking accuracy is phenomenal, and truly resembles a real bow and arrow physics, so after a while, you will be able to predict where your arrow will land with great precision.

Everything has been taken into account, from the distance of the pulled bow which translates into force, to the arrow trajectory curvature. There is simply no game that better simulates archery than QuiVR.

Another great feature is the fact you can play it with a friend co-operatively. Or, you can queue up a multiplayer experience where you team up with others in an effort to stop the advancing hordes of enemies together. It offers great replayability with a slowly but steadily increased difficulty which will challenge your skill as you progress.

As you can see, there is no shortage of entertaining and captivating VR bow and arrow games for any fan of archery. You can choose whatever setting suits you best, from war-stricken cities to snowy mountain passes or dojos set in re-envisioned Japan, these game offer something for anybody.