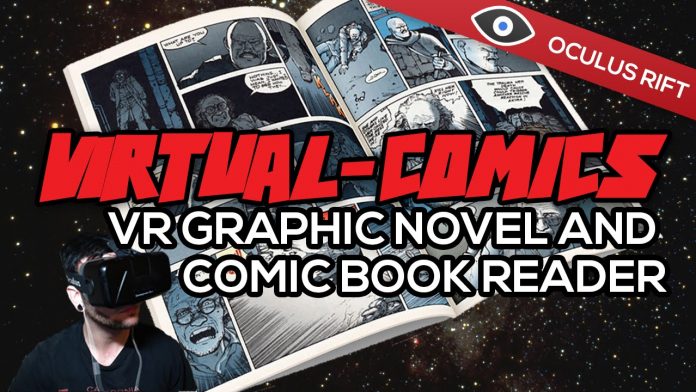 Virtual Reality has come a long way since its beginnings and has in the meantime revolutionized many industries. Medicine, education, engineering and many other fields have utilized the power of VR to achieve great developments. Currently, every new day brings with it new and exciting ways in which people use VR. And who would have said that the comic book industry will see a new dawn in the realm of virtual reality?

Comics have come a long way since their beginnings as a cheap entertainment paper, bought at the traffic stores in bulk, and have since then become more of a collectible item, and some issues are even seen as investments and status symbols. Not to mention that the current trend in Hollywood is almost completely focused on comic book heroes, for which we are grateful.

But, no one can argue that the future of comics will be as bright as it was in the last century when the paper was the main medium of idea transfer. The world wide web has completely pushed newspapers and books aside as a medium through which people consume ideas and entertainment.

Luckily for the comic book industry, there is no shortage of enthusiastic comic book lovers who wish to breathe in new life to the medium, and are working hard to bring comics to VR, so here we bring you the three most promising comic book applications!

MadeFire, the most promising startup on our list received almost $6.5 million in Series B funding and has developed a VR application that allows artists to convert their comic books into a full-fledged 3D experience.

Now, using MadeFire app any artist can distribute his comic for free. The app changes the way comic books are read, or in this case, watched. Rather than showing one page at a time, the app shows you entire panel at a time. An image that could be the only couple of inches big in print can now we enlarged and remastered to fill your entire field of vision!

By deciding to show one panel at a time the people at MadeFire have completely transformed the comic book experience. When you have skimmed in a couple of seconds a page from a comic, now you can savor the details more deeply.
You are truly seeing a moment, frozen in time.

Not only that they have added a third dimension to the comic book reading experience, but have added a fourth one as well – time!

Pages that have a lot of dialogue, which can be a bit confusing at time, now show a natural progression of action. Dialogue bubbles that appear in timed sequence now help readers to follow the progression of events more concisely. And for fast paced fight scenes, the timings of the bubbles can mirror the action.

To achieve this, MadeFire uses a trigger system in which tapping your headset or controller leads to a specific action in one or more layers of the comic. An action can be simply fading out the panel in question or something else, whatever creator wanted them to be.

But the two main factors that make reading comics in VR so amazing are motions and sounds. When you view the comic, every panel shows an animation of the scene, also at key moments, a sound will play that increases the immersion, such as a gunfire shot or a scream.

MadeFire has a partnership with both Marvel and Magic Leap. Marvel comics are released on their mobile platform, while with Magic Leap, they will be releasing an AR version of the app with their headset.

There is no doubt that they will only increase in popularity with the passage of time.

Another promising project by Square Enix shows in which direction VR comics can develop. It is not so much a virtual reality comic, but more a 3D VR animated film framed as a comic.

Project Hikari is fully compatible with Oculus Rift and Vive and is focused on bringing manga to life.
The visuals work to bring a 2D world of manga into a 3D VR experience by allowing you to interact with the environment and thus allowing for a more intimate experience.

For example, in the opening scene, the viewer starts in the backyard of an apartment building where two main characters live. The viewer is given the opportunity to freely look around the apartment as if he is living there until the action progresses to a new scene.

Square Enix uses what they call „live panels“. Shaped and used like ordinary comic book panels, they are also used to frame and place shots of the scene without the viewer moving at all. But inside these panes, everything is three dimensional.

Project Hikari is also fully voiced in Japanese but followed with dialogue bubbles with English translation, so the viewer can feel as though he is inside the manga itself.

While there is no consumer product that can utilize this amazing technology, it is only a matter of time until some other artists pick up on where they left off and grace us with new and amazing comics.

The third entry on our list of amazing new ways in which comic books can come alive in VR is Magnetique VR
It is one of the first storytelling apps that gives users 360-degree vision by placing them inside the comic book so that the viewer feels as a first-person character inside the story.

Unlike MadeFire, all the action happens around you, not in panels in front of you.
While unfortunately only available for Gear VR, we can hope that soon it will be released for other platforms as well.

Regarding the artwork, environments, and characters, nothing bad can be said. They are done simply beautifully. Just like MadeFire, there is audio during particular moments which only increases the immersion.

These three exciting applications serve as a window into the future, a bright new future for the comic book readers who will see VR as a new comic book medium. There are ample of possibilities to change that vision of the future into something else since only the imagination of future creators is the limit.
We surely live in exciting times, where we can see how old art forms are being transformed and new ones are being made.