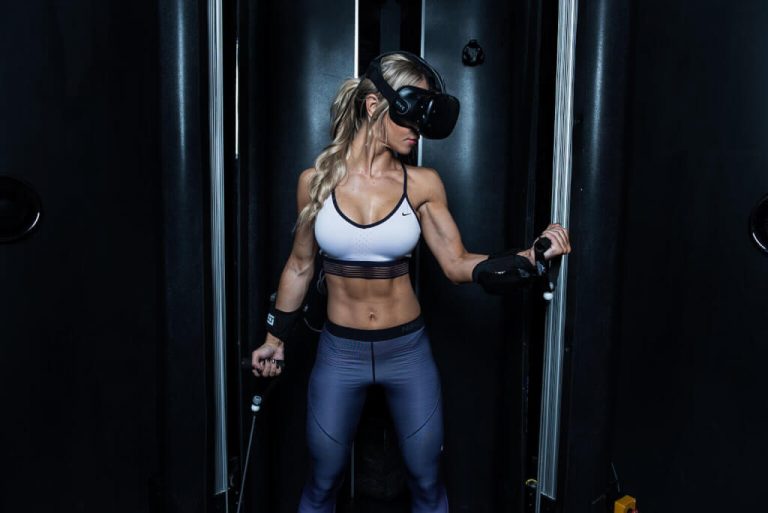 Exercising and playing video games simultaneously seemed like an impossible feat for decades. The widely spread misconception that people who enjoy playing video games are physically scrubby somehow goes with the territory, so we got used to it. I personally sweat quite often even while playing non-VR games, but this is due to increased excitement or stress. Yet, this is a far cry from real exercise.

And while your physique has nothing to do with whether you’re a gamer or not, with introduction of room-scale virtual reality and motion controllers, all of a sudden games became actually physically demanding! So yeah, nowadays excelling at some virtual reality games requires literally require breaking a sweat!

Brace yourselves, fellow gamers, this is a great time to be alive! Our time has come! We can nowadays play games and exercise at the same time!

So, let’s take a look at some of the best VR exercise games!

Superhot VR is a brilliant virtual reality shooter game. For the most part, the environment is set in an all-white sterile room and you get to fight against a swarm of bad guys coming at you. Now to set things straight, you wouldn’t stand a chance if they were moving in real time, since you are heavily outnumbered and outgunned.

Fortunately, in Superhot VR, you will be fighting in slow motion. Therefore you will be able to sidestep bullets and incoming attacks, which makes you feel like you are Neo from Matrix. You have so many ways of dealing with the bad guys which ensures it doesn’t get boring. Also, they effectively drop their weapons once they’re dealt with so you can pick those up and let them taste their own remedy!

Aside from the exercise, this fun VR game will require tactical thinking as well!

The Thrill of the Fight is an intense VR boxing simulator. Now, if you’ve ever wondered how the hell professional boxers get tired when they are pretty much just standing there, you’ve probably never tried punching a bag for more than 30 seconds. Well, now you get to experience how demanding and intense boxing is, and without the possibility you’ll actually get knocked out.

The developers did their best to bring the realism to this simulation, hence you won’t be able to knock out your virtual opponent with few simple one-two combinations. It takes literally HUNDREDS of swings, blocks and dodges to take down your adversary. The Thrill of the Fight will surely make you sweat a lot, so it’s a good idea to visit VR Cover and find a suitable product for your headset.

If you’ve never laid your eyes on Audioshield, the simplest explanation is that it is something like a VR equivalent to Guitar Hero. Basically, Audioshield gives you rhythmically fueled music workout. The idea behind it is simple. First, load your favorite music from the PC. Then, the game generates a bunch of neon paint blobs which are racing at you and your shield. You literally have to punch your way through the song. It may seem complicated but it really isn’t at all. Just check out the video below.

As you can see, the game is very simple and intuitive, and besides having fun and burning calories, you’ll also be practicing some slick dance moves!

In Holopoint, you assume the role of a Samurai archer. So how does shooting arrows feel in virtual reality? Surprisingly realistic and very, very intense! The thing is, you won’t only be shooting stationary targets, but also ninja invaders who will shoot back at you! There are two options when dealing with incoming missiles – either dodging or destroying them with your own shots in mid air. Now dodging and repeatedly shooting arrows is where the intensity of Holopoint comes from. Make sure to take breaks!

All things considered, Holopoint is very simple game but it is unlikely that you’ll get bored by it. On the contrary, you will want to replay it over and over again!

We hope that you liked our list of best VR exercise games! Game on!